Investment positioning can greatly affect cash flow management (aka income), especially for someone who’s getting close to or in retirement. As people get closer to retirement they don’t want to see those big losses. 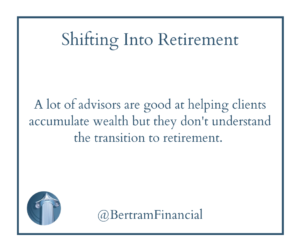 A lot of advisors are good at helping clients accumulate wealth but they don’t understand the transition to retirement. Mutual fund portfolios are great in the beginning when you are starting out, to accumulate wealth, but as the accounts get over $100,000 they become less efficient.

Many advisors don’t understand the transition at retirement. The retirement shift means it is not about building so much, it’s about maintaining and being able to create income from your portfolio.

You probably remember that it was said that you could get 6% of your portfolio for retirement income, and then it was 4%,  and then it was 3%. This is because of how it’s managed. If it’s just left in those funds, as it normally is, then the lower amount is because when there’s a bad year early on in retirement, it could be completely devastating your income plan.

Guy, I know you understand that and your team manages accordingly.

I think that’s the biggest change with portfolio management. Once the typical person is going into retirement, they’re getting out of that accumulation phase. Not only are they getting out of the accumulation phase where they’re no longer actively contributing to these different saving sources, whether it’s through the 401k or on the taxable non-qualified side, but it’s actually going in reverse.

It’s flipping all the way to the other end as they need to start relying on their investments for income. It’s no longer saving, but you’re actually starting distributions from these particular accounts.

That is where volatility control starts to become more important, more pressing.

In the accumulation phase, volatility is more a psychological factor. You don’t want someone to be doing the wrong thing at the wrong time. When things are low and as long as they’re pretty well diversified, then it’s really not that big of a deal on the volatility side as you’re accumulating. The way to think of it is the new money that you’re putting in, you’re just buying more on sale if markets are temporarily down.

The big difference is that once you’re in that distribution side of it (in retirement), it’s not only that things are going down, but you’re pulling from them as they’re getting lower.

Determining the cash flow becomes very important because no one can predict what’s actually going to happen in the short-term with the markets. No one’s smarter than the markets.

There are so many different variables that intertwine and psychology on top of it. But what we absolutely can understand at any one point is correlations. We can know how certain positions are going to be acting in different types of markets.

So what’s important when someone is in retirement, in that distribution phase and we know how much is required for cash flow (income) is needed, then we make sure that you have at least two years worth of cash flow position in a way that’s not going to be correlated with the equity market. These are things that are holding their value, or hopefully even going up in value. Then the concern is less on what is what the market is doing because you are now protected in terms of what’s really important, your retirement income.

If the equity market is really going crazy, going through a lot of volatility, it’s ok because your income/cash flow is not participating in that. So it’s very important to reposition the accounts in that way, in that manner, changing that mindset of the way that they’re being managed.

A balanced fund or a 60/40 portfolio is not managing a particular person’s actual need. It becomes more important to be shifting the focus from those pooled structures such as mutual funds and ETFs into things that are more transparent so you actually see the mechanics that are working. They can say, we have this type of positioning because we know in any particular market, we have this much cash flow that’s going to be preserved because the core of these assets is not correlating to a down equity market. In fact, they might be going up because of the flow of funds. 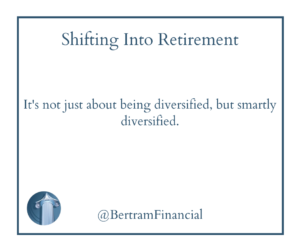 It’s not just about being diversified. We see people all the time come in and they have like six funds or 10 funds or however many funds and they think they’re diversified because they own all these different funds.  But when we dig into it, all those funds work almost identical. So, they’re still highly correlated and a lot of times they’re holding a lot of the same things inside the different funds. So it’s not just about being diversified but smartly diversified.