How Can I Create Income In Retirement?

When it comes to retirement, one of the biggest challenges we have to face is how to create income in retirement.

When you’re working for years, one of the things that you get every couple weeks, or every month is a paycheck, right?

Then it becomes a question of, “How do we recreate that?” How do we make sure that you’re getting a paycheck in retirement?

Some of you may be thinking that you will be getting a monthly payment via Social Security. That’s great and can be part of your paycheck, but most often we need to get more than that.

While Social Security is a benefit that you’re entitled to, it’s probably not going to be everything that you need. That’s why you saved.

How Do I Turn That Into An Income?

As we get into talking about this, the first thing I want to ask you is, “Why is that important?”

We know it’s important, but there’s another element here, and if we know where that paycheck is coming from every month, that gives us some financial security.

I believe it’s important to have that financial security because I don’t believe you’re done yet.

We just did a great First Friday with Mary Helen Conroy and one of the things she said is this, “If you’re breathing, you’re not done yet.” I believe God still has plans for you.

So maybe it’s not the same job you’ve had forever, but it could be something else.

Maybe it’s volunteering somewhere. In taking people to Haiti with me, some of the greatest stories are of people that are retired and are now able to use their gifts to help in a different way. I love seeing people live their dreams and pursue their passions!

It could be as simple as that you retired from your job so now you can babysit your grandkids and be more prominent in their life.

Whatever it is, you’re not done yet, right?

But in order to feel confident and not be worrying, you have to make sure you’ve created a good retirement income plan so that you know where that paycheck is coming from every month.

How Can I Guarantee Retirement Income?

So, the first thing we want to talk about is what do you want for income in retirement?

Now when I say this, I want you to think about it in two ways.

What do you need every month to make sure that your lifestyle that you’ve been used to?

Or what’s that base retirement income that you need?

And sometimes people say man, I’m going to do a lot of traveling early on in retirement, so I need more income then and that’s fine.

We want to make sure we plan for that, but I always think it’s good to just have that base income of what we want in retirement.

What will give you the financial security to pursue all these other things we just talked about? That’s different for everybody, so it’s important for you to think about it.

Now the flip side of that is once you have that in mind, we have to look at your retirement and identify for your savings the different sources of retirement income.

What is the income you can generate?

You cannot just pick this magic number out of the sky and guarantee that you’re going to have that and not run out.

Sometimes we find that what we can generate doesn’t quite fit what we want.

Now I would say that happens very seldom, but when it does happen it is because of unforeseen circumstances. This could be due to our plans changing and then we just have to get back to the drawing board and be creative so that we can really do our best to get you to that base income.

However most of the time the majority of people can actually generate more income than they need if they do it in the right way. They can get enough income to have it to be able to be stable, maybe more than they thought they did.

But how do we do that? That becomes the big question.

It has to be done in the right way.

A few weeks ago we had a blog post, Should I Sell? where we discussed the colors of money. This information is available in full detail in our free ebook download as well. This method will help us relate to how we can generate income. Do you want predictable income in retirement or probable income?

When looking at the colors of money strategy, we first have yellow money. This is our savings money, which is guaranteed and is safe right now. It’s not making a lot, it is just there.

Then we have red money. That’s money that is at risk in the market and can go up or down.

Finally, we have green money. This is that money right in the middle which is a protected principle.

Looking at the colors of money, I want to go through each of these quickly as it relates to income.

When I started in this business in 2001 people could retire,  put their money in CD’s and just take out the interest for income. They were generating 4% or 5% interest and living on the interest.

Thinking about this strategy right now, you may be laughing because could you imagine trying to live on the interest from your CD.

It’s not creating enough for anybody to sustainably take the interest off of anything in yellow and create income with where our rates are right now.

Because of this, we often jump over to red, which is anything that’s in the market, like your 401K.

Depending on how you’ve situated, all of your money might be in red before you retire. It used to be that you could take 6% our and not worry about running out of money. Then it went down to 4%. After 2008 we were hearing you could take about 3% out. However, it is all about how your money is managed.

If you just have it in an account that goes up and down with maybe 60% stocks and 40% bonds, then you are just riding the market.

If you hit a downturn early on, it could devastate your retirement.

In 2008 we saw this come true where people had to go back to work because their retirement income was hit so hard.

So if you’re taking money from red, it has to be that it’s being managed in a way to create that income.

One of the managers that we work with is Guy Riccardi and his team is great about doing this. They understand that there’s a difference between growing your portfolio for retirement and using it for distributions in retirement.

How Do I Know I Won’t Run Out Of Money In Retirement?

At this point, when you’re taking income, it’s a different philosophy on how it’s invested. You need to make sure there isn’t anything in your portfolio that is not correlated.

You want to do this so if the market goes down, you’re not just following it all the way down. Instead, your portfolio will be coordinated, meaning that you’re not losing at that point that’s locking and guaranteeing your income.

When you do that right, we can get you closer to the 6%, but I can promise you most of the time that’s not the case. That’s not happening in your 401Ks, it’s not happening in most people’s brokerage accounts, and if you’re going to be taking income from red money, then this is what you need to ask the advisor; “How are you managing my portfolio to protect my income?”

If they say it averages over time and you’ll be fine, then that’s not a good enough answer. 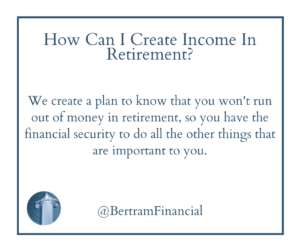 We can take income from red money, but it needs to be done strategically.

You need to be sure it’s being managed in a way that guarantees you that income. It needs to be managed towards income so that you know that you’re going to have it.

Going back to green money, we always talk about the three rules of green money. Protect your principle, retain your gains, and guarantee an income.

A few weeks ago I covered the topic of Annuities on my blog, including what an annuity is and the features in an annuity, which is an index annuity and variable annuities.

As you’ll see in my previous video, we like to stay with index annuities. This is because you can guarantee income with an income rider.

Income riders can all look different. They can give you guaranteed growth on that part before you take income. Now, if you have an income rider, for example, that’s guaranteeing you 6% a year, but it doesn’t mean you’re guaranteed 6% a year. It’s a factor for income.

If you take that and get 6% a year every year, 10 years from now, you want to take the money out in a lump you can’t. (you can take the accumulation value, but not the income value) That 6% was for income and will pay you back over time. So it’s important to know that it’s guaranteed growth for income only. There are riders where if you didn’t take it for income, it can eventually go to your beneficiaries as a death benefit. But maybe they take it over a period of time. The reason they can guarantee more growth is they’re not paying it back to you in a lump sum but over time.

So sometimes you can get guaranteed growth before taking income with an income rider. Once you take income, it’s guaranteed for your life or your spouse’s life.

So if there are two of you, we often try to do it for both lives. That means even if the policy runs to zero, you’re still getting paid that income as long as one spouse is living.

The nice thing about the income riders though, is you don’t lose access when you guarantee income. With an immediate annuity, one of the biggest complaints I see is, I get this income, but I never have access to the lump sum. An income rider still gives you access.

Let’s say after a couple of years you decide to pull it all out and go buy a house in Florida. You have the ability to do that.

But if you don’t and you just take the income, the company guarantees that for life. So there’s a feature with that too.

Sometimes there’s a charge for the income rider and sometimes not, it depends on the company and the design of the plan. What annuity is right for you really comes down to what’s important to you. That’s why you should be talking to an advisor.

If you have questions, make sure you talk to us and we’ll help you to figure out what type of income you need and how we can generate it for you.

If you have more questions, download the book and watch the Four Steps To Your Dream Retirement.

Also, please feel free to give us a call. You can schedule a call with me, with Guy, our portfolio manager, to see how they manage income to come out of the red.

If you have money in the market, don’t just throw out their amounts and take it out without knowing how it’s going to be managed and if it’s going to be sustainable because the last thing you want is to run out of money. 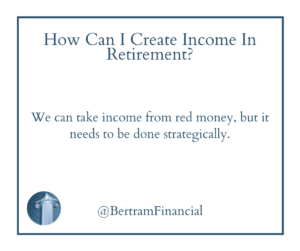 We create a plan to know that you won’t run out of money in retirement, so you have the financial security to do all the other things that are important to you.

You have the security to do it because I know God still got big plans for you.